Thank you for your patience while we retrieve your images.

19.11.13 - Berlin. Put a roll in my camera that I had shot through once in Jo'burg, eight months previously. It felt apt given that both cities reverberate with historic segregation.

I had also been working on reintegrating aspects of myself. Intently. And the time had now come to approach a sense of paralysis within. I had become so overtly conscious to nuance and tone, analysing and editing, personal patterns of attachment and achievement, that I was trying. Become rigid, exhausted parody. And still yet avoiding my vulnerability and fear of rejection. So it is. That which we seek and fear not finding – it lies within.

With a line of Jack Kerouac’s reverberating in my head “ First thought, best thought”, I resolved to neither re-read nor edit anything I wrote - whether for myself or to others… And with my camera this evolved into a practice where I’d shoot, without hesitation, what inspired notice – if I found myself pausing to consider or re-frame, it was over and I did not then take the photograph. Curious disciplines, perhaps, but ones that felt useful and recalibrating.

I kept this same film in the camera for the month I was in Berlin - rewinding, re-shooting... Afterwards, I put the roll away. On developing, some months later, I did then edit it into pieces I found intriguing - with an enlarged sense of space and instinctive rewiring.

It has – for me - become a project about transparency. The simple urge for transparency in our hearts. The complex bounce of it along the concord between control and chaos.

Hence the progression of studies that take the printing exposures to a place where the density of information is desaturated to an essential – the resonant minimum - and is integral to the vulnerable structure of the film itself.


“I’m afraid of such a palace precisely because it’s indestructible and because I won’t ever be allowed to stick my tongue out at it.”
Dostoyevsky, Notes from Underground

“The child is innocence and forgetfulness, a new beginning, a sport, a self-propelling wheel, a first motion, a sacred Yes.”
Nietzsche, Z I Of the Three Metamorphoses 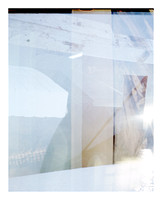 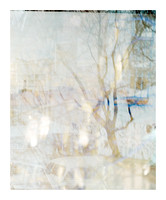 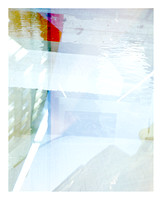 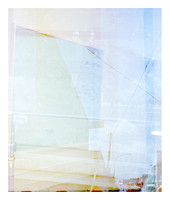