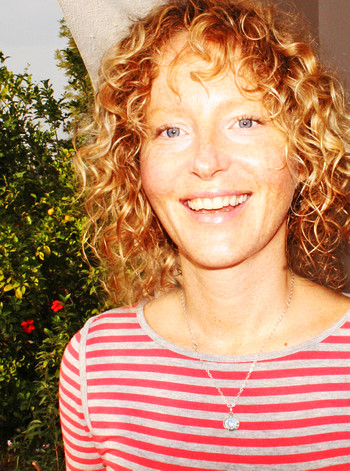 I take inspiration from nature, whilst exploring the phenomena of spontaneous perception.  Engaging with open, playful exuberance remains my preferred mode. The intellect only takes me so far - within the dance of the ephemeral moment  and the mysterious field connecting all things. Where possible, I choose to leave the sceptics to their own devices, (believing Einstein had it right in claiming we can't find the solution from the vibration of the problem).  I view my work as ongoing discovery  - into my self and psyche - our precious, precocious humanness -  all the while exploring how our various languages can empower us towards describing such elusive quanti to each other.

Within the on-going changes in the medium of photography, my work continues to be 'analogue' - shot on film - involving no digital manipulation in realising the image - the nature of film being integral to the work itself.
___

Exercising my sense of adventure, I've learnt through creating installations of work in different spaces in various countries; from galleries to battleships, palaces to public gardens.

In 2004 I moved to make Ibiza my base. I initially earnt my island stripes working for Pacha as their press photographer during 2005 and '6. Being represented by London's Lupe Gallery, meanwhile, encouraged a continuing focus on my artistic work. I forged an on-going creative relationship with South Africa and spent time in Berlin to ruffle up my island feathers.

For the past five years I have immersed myself in following a different kind of map - signposts on an internal journey  -   developing my work through research and experimental installations.    With my Portal Project, I have combined making my analogue work with new production technologies, allowing me to embed photographic works into architectural structures.  Currently also working on a book  'Blow as deep as you want to blow', and developing the second phase of my installation Beyond All Measure.

Born to Anglo-Swedish parents in Teheran, I grew up in Iran and Vienna, Austria. Schooled in England, I  developed my love of language & story whilst doing a degree in English Literature in London, where the writing of my dissertation on the abstractions of Hunter S Thompson, William Burroughs & the Beat poets compelled me into exploring more visual mediums.  How do we breath fresh space and perspective into the inevitable conditioning of our languages?  Where are we carving out new realities through our descriptions of what we feel and see? After doing the Foundation course at Kingston University Art School, I went on to complete a Masters in Photography at Goldsmith’s College, London in 1995.

I then worked in London as a photojournalist - primarily within the music industry - being published in Wired, i-D, Raygun, Mute, the Independent et al. - whilst also shooting for Amnesty International, and continually developing my understanding of what it is to tell a story, become an artist and how to make a living doing both.

“.. despite the abstract textures she achieves, Ericsson doesn’t use digital techniques …Somehow, though, she finds the middle-ground where real-life becomes exquisitely strange, seemingly by itself…”
(i-D magazine)

-  The Alchemy of Her, group show, Atzaro Ibiza